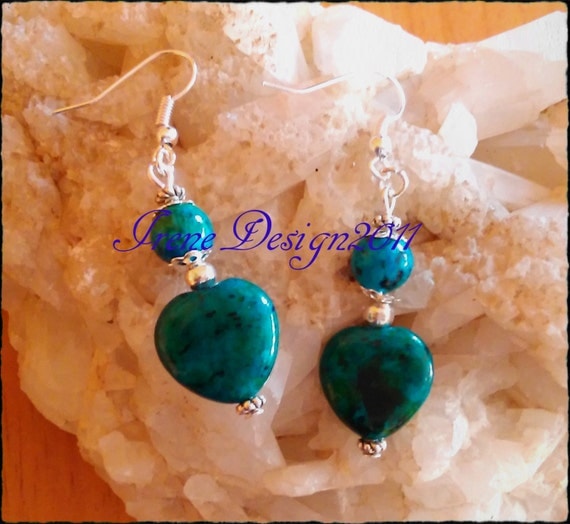 Chrysocolla belong to the Heart & Throat Chakra. Chrysocolla is a love gemstone, it supports love and balance. Chrysocolla also helps with strengthening of our intuition and support our spiritual development. I find it amazing to use in meditation too

Would you like to wear these earrings? Please tell me, thank you 🙂

Wish you a happy day

NB: My dog Odin is still very ill and he is bleeding much longer time, than expected. My vet is doing his best to find out why, but this is not an easy case. Until now all usual and known illnesses for dog are excluded

Thank you for your patience, I haven’t been much around at your blogs for a while, but I use mostly of my time to take care of Odin. I will visit, when I find time and abundance

A spring photo of Odin, where he is happy and feeling good. He is not looking so happy today

Odin started last week to bleed from one side of his nose. Then our vet took blood tests to find out the reason for this. He found out, that Odin had an infection and otherwise his blood test looked good. There were no indications for other illnesses. Odin got 2 kind of medication and we hoped the best. The vet told me, that Odin could continue the bleeding until Monday

In the weekend, Odin started to bleed from his nose many, many times. I did my best to stop it and to keep him calm. Didn’t leave him alone at all, because he was scared, when he started to bleed, which I found understandable

It became worse and worse and more often with the bleeding, so I contacted the vet again and Odin got more tests and X-ray and needed then to go to another Vet Hospital for Endoscopy and other kind of tests, which happened yesterday. Two times of sedation in one day can be a little tough, so our Vet decided to keep him in the clinic last night to secure, they could help him, if anything would happen

I’m happy to be able to say, that nothing bad happened. Now we know, that Odin has an infection in one side of his nose and they took more blood tests today to find out, why he got the infection from beginning, to avoid this to be repeated. We should get these answers Friday

Odin came home in the afternoon, happy to be home again and I was very happy to see him again. He is now very tired and I will need to keep him as calm as possible for the next 2 weeks. No long walks and nothing exciting, because this can start his bleeding again. I got new medication for him and need to give him an injection daily to avoid more bleeding the next days

Odin has been shaved many places in the last week, so I decided to share a more happy photo of him

Thank you very much for your kind support

NB: I don’t know, how much I will be online for the next days and thank you for your patience

Update at my move

I’m now in my next move to a new house, after having painted, repaired and cleaned the house. My posts are scheduled these days and I will be very busy with the move

I will try my best to visit your blogs, but I know it is not possible to do so much as usual. There will be a time for unpacking og placing and the Summer is also here in Spain now and it is very hot to move at this time. The last days we have had up to around 35 C. – 95 F. and some days even more warm. It is a little tough, I will say

I’m looking forward to enjoy my coffee at the veranda in the shadow and the pets will be so happy to be able to get out in a garden again, I think ❤